Since 1996, the Slovenská Asociácia Finančníkov (SAF) has been a respected professional association that brings together experts in the field of finance. Members are financial directors, tax experts, auditors, treasurers, statutory officers, and academics .


The mission of the SAF

We strive to promote the professional integrity of those working in the financial sector and to bring them together to encourage mutual solidarity and co-operation. We follow evolving trends and the ever-changing expectations placed upon of financiers at corporate and national level.Our activities and educational programmes reflect this. We frequently hold discussions with academic institutions, professional associations, and foreign partners.

Goals of the SAF

Our main goal is to create a stimulating platform for experts in the field of corporate finance to hold both formal and informal discussions and share their experiences and opinions.. In addition to this, we educate financiers, organise seminars and conferences, and publish professional publications. We also enable members to obtain globally recognised professional certificates. We work closely with government and state institutions in proposing changes to laws for the benefit of the business community and citizens of the Slovak Republic. We bring together financial experts with the intention of guiding emerging legislation in the Slovak and European economy.

History of the SAF

On November 22 1996, the Slovak Association of Corporate Financiers held its founding General Assembly under the auspices of the then Minister of Finance Sergej Kozlík, the then National Bank of Slovakia (NBS) Governor Vladimír Masár, President of the Association of Employers' Unions and Associations Michal Ľach, in co-operation with the Association Française des Trésories d’Enterprise (AFTE) the Association of Slovak Banks, and the University of Economics in Bratislava. Our special thanks go to: The late Ing. Vladimír Valach – a former Slovak ambassador in Paris. Patrick Mesnard – Chairman of the French-Slovak Chamber of Commerce and Director of the Division of Economy and Procurement of the joint-stock company Chemlon Humenné. Francios Schlumberger – President of AFTE. František Chvostáľ – Economic Director of Chemlon, a.s. Humenné and the first president of the SAF. Virgil Farkašovský – the first General Secretary of the SAF. 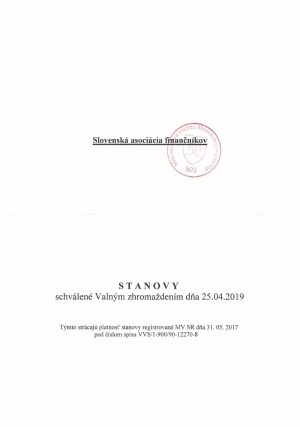